I enjoyed being totally immersed in the SpecFic Colloquium at the Gladstone. The toughest part was getting there (or for me, anywhere) that early in the day. For once the TTC didn’t let me down. Left home at 9 – where I accidentally met up with Mike Bryant for the trek there. Arrived by 9:40.  A good house of attentive listeners for the event added to my immersion. Although the event organizers did jam in as many rows as possible – meaning it was set for people with no legs but I made my space and stuck to it.

Things started promptly at 10 a.m. with Robert Runte : “Canadian Speculative Fiction in the 21st Century” – a fascinating overview of the history of Canadian SciFi and the ways in which it differs from the US and even British genres. He observed that thanks to current global marketing and consumption ‘cultural’ identity is become less important. His time ran out and it was clear he had a lot more to say. Particularly about how marketing dept. trumps editorial input.

With a pause merely for introductions he was followed by Helen Marshall “‘The Book is Dead; Long Live the Book!’: Some Thoughts on the Coming of eBooks” – which I expected to be how ePub is changing the market but instead what how eBook have effected the form and content of writing. She had a great historical quote/complaint about the use of paper being a passing fad as only parchment had lasting value. Due to the need for flowability – poetry doesn’t make the transition to e readily. Alas ee cummings.

After a short break things resumed with Robert Shearman (Guest of Honour): “Writing, And Attempts to Justify It” – a great keynote talk – well organized and very funny – he suspects writer’s block can sometimes be getting caught up in the fact that the words we write now aren’t the same as the ones we’d use if we wrote half-an-hour later & those later words would be so much better . His writing partially sprung from being a stutterer – having to find alternatives to words he couldn’t say with ones he could.  His approach is to write weird things that become normal.

A welcome lunch break that took me to a nearby Starbucks – to get out of the hotel and into the damp cool of the afternoon. It was time for caffeine to get me through the rest of the day.

The afternoon kicked off with Peter Watts: “Hive Minds, Mind Hives”. The instinct to survive may not know the difference between metamorphosis and suicide – in order to become posthuman we may need to develop an awareness to the nerve network level – or something like that – but at the nerve net work level there is no awareness. I loved his presentation, slides and even the scientific syntax that he used. I’m sure I understood every word on a subconscious neural level – so my subjective awareness got to enjoy some of the sweet SpecFic nerds who were digging his every word.

Next up was  Karin  Lowachee: “Ender’s End? The Modern Reality of Children in War” Another solid, and this time, for me, very understandable presentation – she started with a slide show of child soldiers – some fussing over getting the music for it but it was much more compelling without the music. She talked about finding the science of science fiction much more attentive to details and realism than the psychology of the characters. As a result most people think of SciFi as space opera, a la Star Wars – not as something with emotional complexities. She did delve into Ender’s Game but her conclusions apply to any well written book.

The day ended with Scott Bakker: “Less Human than Human: The Cyborg Fantasy versus the Neuroscientific Real” I was expecting a medical/engineering approach to how a Borg would work but instead it was a fascinating talk about transhumanism and the singularity. Much like Peter Watts’s presentation I found this fascinating as opposed to instructive. I’m not sure how it will apply to what I write but I’m glad my subconscious was immersed. By this point in the day I wasn’t even trying to absorb that much and the tech heavy syntax was putting me to sleep. Though once again my subjective awareness got to enjoy some of the sweet SpecFic nerds who were digging his every word. I was just a meat bag following my ancient evolutionary programming.

Sandra Kasturi was an excellent host who kept things moving well. The Gladstone was an excellent space for the day. The room was well lit, the chairs were not designed for long sitting – washrooms within easy reach – the men’s room looked good but that urine smell sure didn’t make me want to try the deli there.

in which I fulfill my dream of a reality show:

Life of An Unknown Poet

I was handing my credit card

to the Winners clerk

when my camera crew got into shoving match

with her camera crew

I didn’t see how out of hand things were

till I watched a podcast of

The Making of The Life of An Unknown Poet

by the crew following my camera crew

my head camera man was asked

‘how did the poet feel

when he was accosted’

he pointed his camera at me

as I walked out of the store

glad I was still the one on camera

I was tempted to go back

but didn’t want to interrupt

I had my own life to lead

and what he thought I thought

wasn’t all that vital to me

the world knew how shallow I was

except for this show

even after six seasons

I wasn’t getting reviews

and this pissed me off

in fact my viewers

but I had to draw the line somewhere

they could watch me flush

but couldn’t see me take a leak

I have some pride

later there was a news report

of the shoving match

not one of my crew or my crew’s crew

it struck me how futile it was

that no matter what one did

someone was bound to suffer

that even allowing my personal angst

to be the fodder of millions

it didn’t stop the circle of suffering

the camera crew applauded me

as I wrote those lines about suffering

which made it all worth while once again

I can go living giving all to my life

even if there is no bump in book sales

or any chance of sex

unless that camera man

from the clerk’s camera crew is available

he looked kind of hot

in the podcast of the shoving match

a spark of known reality 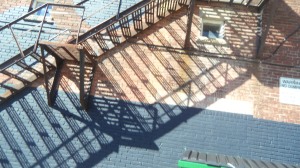 One thought on “Ancient Evolutionary Programming”