BuDa kicked off 2013 with a dynamic January show, hosted by Philip Cairns, with three features who left me wanting more – sadly time restraints at Glad Day force us to wrap the show by 9:40 or all of them would have been called on for encores.

First feature Faye Guenther read Hostage Spaces – a short story told from the ‘You’ point of view. It opens  with an almost clinical description of a building’s white marble lobby: “smooth dove-coloured leather couches that never hold a body, standing in illuminated pools of white on white” The descriptions move into a more personalized sense of the space, of the You addressed, “the soreness begins to explore your face”; of the life You lives, then brings other people into that life – a lover, a coworker: “you lifted your head and recognized someone….Her eyes were the color of trees this time of year, you thought, reaching for sun.” A naked woman appear to You offering, perhaps, a release from the space that hold You hostage as you are “smoking into the soft precision of a spring night.” 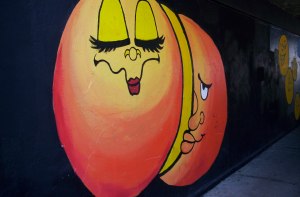 Next up was Regie Cabico – who captivated us with his well-honed slam skills & structures. He sang (nicely), made us laugh – men meeting and exchange cell phone pics of their cocks  and place those cell phones together to rub in the safest sex possible – ‘he smelled like a thousand likes on Facebook’ A raunchy, queer set of the highest order ‘my mouth is perpetually the year of the cock’ – more please – he closed with, what I regard as a slam staple – how deep is my love, in this instance two poets in love: ‘your poetry is so lonely Orpheus wants you to be his lyricist.

Joshua Jlatte Lopez – the music feature was sheer joy. He did an amazing set of blues standards: Spoonful, St. James Infirmary etc and some originals. His guitar playing is tasty without being flashy even when it was throwing off sparks in effortless runs and solos. Spirits of Robert Johnson, Canned Heat, Roy Buchanan flowed though his hands and vocals. One Spoonful – not enough.

Other news – the clean up of Valleys has been moving along well. I had to ‘translate’ my original file from appleworks to the latest Pages by importing it first into simple text – that process seeded it with a lot of small code inserts that I have to delete. I was hoping to do lots of cuts but so far that hasn’t happened. It flows better than I thought. I’ll have a PDF version ready to sell in a week or so for those you who find the excerpts too slow.

I’ve also been plugging away at my Bradbury story-a-week challenge but failing – I’ve been working on the same story since the first of the year – it grows but characters, as I hope, take over and don’t want to be done with so quickly – so perhaps I’ll aim for a story a month instead – I’m at about 2000 words for this one so far.

3 thoughts on “Spoonful of Beautiful”