The weather relented enough for me to get out to Nik Beat’s Howl show at Q Space Sunday night. I’ve been looking forward to to checking this new space out since it opened last year. A great space for spoken-word & unplugged music. A simple kitchen set up offers various teas, coffee, juices, assorted alcohol libations; snacks – salads, sandwiches, desserts. Lots of outlets to plug in a laptop. Comfortable seating and an excellent sound system. 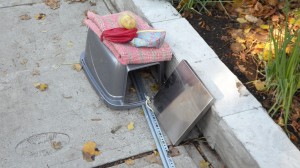 Nik hosted a typically eclectic line-up that opened with Tim Masterson – who read a chapter for him novel ‘Far From Kind and Pretty,’ as well as an ‘essay’ – both were filled with allusions to 70’s/80’s TV shows, pop music, clowns, bunnies as his character dealt with mother issues; ‘none of the pens work in Mom’s House.’ He was followed by Lizzie Violet, whose mother feared Lizzie would grow up to be a serial killer. Now that’s a mother issue 🙂 Lizzie’s pieces ranged from  relationship foibles ‘I speak the truth/you whisper innuendos‘ – to chilling zombie narratives. She also took some great show pics.

After a short break we were treated with musical feature Suitcase Sam. I was popped into a time machine and transported back to San Francisco 1969 by this modern Leon Redbone channeler. Sam did a fine set of covers: Big Rock Candy Mountain, Wild Horses and some sweet original pieces. A great guitarist and solid singer who did songs by Fred Neil, Bruce Springsteen and beyond.

Final feature David Clink read comic pieces from his recent book ‘Crouching Yak, Hidden Emu’ (or is it the other way round?). I love Toxic Girl with her pretty ‘button down cholera.’ After David there were a few open stagers, including myself, and the show wrapped. A good time was had by all.