Birthday girl Sandra Cardinal gifted us with a stellar line up for the April Makin’ a Racket. A full house appreciated the features (as well a slew of tasty birthday muffins gratis from the chefs at The Red Rocket Cafe).

Dan Curtis Thomson was first up with a nice section of his one man show about breaking up. Structured around music he did a sweet, almost plaintive song (very Don McLean with its fluttering, falling  notes) ‘falling falling falling out of love.’ He explained that the song ended with a C major 7th chord, an unresolved chord, much like this ended relationship which leaves him unresolved. A nice hint of the larger piece. Dan has a warm stage presence I enjoyed.

Next up was Vanessa McGowan who clearly has no unresolved emotions. Fresh from a poetry intensive in Banff she had some new pieces & old pieces. ‘wear you like a wind blanket’ ‘when my body became my voice I forgot now to speak.’ I’ve reviewed her many times – search will pull up those reviews.

Then Niki Koulouris read some section from ‘the sea with no one in it’ her recent book. ‘once it had been half man, half sea.’ I recently reviewed her – search will pull up that review.

After the cup-cake break Myna Wallin (whom I have reviewed before), on crutches after an ankle & wrist break, read some new pieces about her recuperation: ‘a lethal dose of ‘this too shall pass.’ ’ Then a tasty chapter from Confession of a Reluctant Cougar that reminded us that sex without guilt isn’t really bad sex. 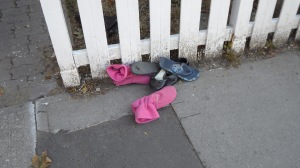 She was followed by Sage Tyrtle (whom I have reviewed before), with a rich, funny & romantic story about internet dating back in the early days when people counted on chat rooms, facing the fears of the unknown & actually, for this story, having a happy ending (in which she wasn’t murdered & buried in basement). Sage is a gifted story teller slipping between characters and situations with great ease.

Last up was Eufemia Fantetti (whom I have never reviewed before) reading a portion of her personal essay Alphabet Autobiographia. A look at language, particularly Italian & the role it’s played in her family history. She explains how applying Italian pronunciation to English words can have hilarious repercussions – i.e. traipsing becomes trapezing.

A handful of great open stagers, many of whom were past features where scattered throughout the show. Mike Sauve’s piece about orange juice was excellent – also had a great talk with him about double-sided nature of politically correctness (for a later blog I think). A great spring show that even with 6 features was wrapped by 9:30.

I have this photo of my dad

when he was a boy of

shown it to friends   lovers

who said that I was handsome

even as a boy

used it as my profile pic once

a photo of my dad

we could be twins

yet there were years

when I was sure I was adopted

I’d go through the papers

I felt so not a part of that family

I was sure there was some legal proof

I never found that evidence

when I first saw that pic of my Dad

I thought it was me

his genetic string so strong

I am tied to it without a doubt

a stranger stopped me in the street

to ask if was his son

one was a bit shaken

it was as if my Dad’s ghost has appeared

he’d been dead for five or six years by then

so perhaps their memory

had played some tricks on them

I am my father’s son

there’s no denying that now 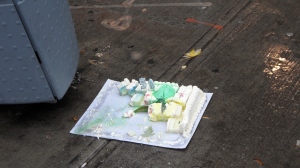 cake left out in the rain