What happens to the truth when a writer gets a hold of it? It mutates into story, sometimes a plot, sometimes a character, sometimes an opportunity to revisit & get revenge. The Roommate springs from another of the Go Viral prompts – this one, you guessed, about a bad roommate experience.

I don’t think I’ve heard many good roomie stories. I’ve had a few roommates, none recently, but I can remember & this piece pulls together some of those recollections into a sort of list poem. I’ve also added a few details from other’s stories of unfortunate shared accommodation experiences. Perhaps ‘shared accommodation’ would be a better phrase as ‘roommate’ is an euphemism for live-in lover. 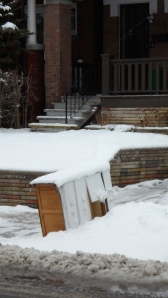 I did have a dish washing resentment against a guy I shared with back on the east coast but I never when as far as to hide my clean dishes. But I would move his dirty ones to one side if they collected for more than two days & just wash mine. He felt I was being petty & frankly I didn’t give a shit. He never went to Calgary. I was the one to leave, for Toronto. I did have a nasty nick-name for him though, too nasty to repeat here, that I would use behind his back. 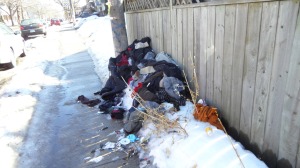 Other details were picked up from stories I’ve heard. Drunken New year’s Eve sex is something that never happened to me, sadly. In those days I would pass out before the that cork could be popped.

I did visit this guy a few years ago when I was on the east coast. He’s doing well.  There were dirty dishes in his sink.

I guess it didn’t help

that I referred to him as Damien

when I was talking to others

it always got an understanding laugh though

a little easier to take

just a little though

I’m not sure what riled me the most

his shoes left in front of the door

so the door never opened properly

when I was getting in

he thought it was amusing

I was irritated by anything he did

said I was oversensitive

to what he considered ordinary behaviour

when he could get around to it

when I started to wash

just the dishes I used

as his piled up and up

he started to use mine

so I hid mine in my dresser

well hid is the wrong word

but he thought I was hiding them

to get even with him for some reason

and when I told him

at my up tightness and inflexibility

his pubic hair would

cling to the shower curtain

would be in a tidy pile

on the kitchen table

there was never any milk left

would roll their eyes

when they saw how he lived

how could I put with him

as if I was sleeping with him

and that his cock was worth all this

because I only had sex with him twice

once the week he moved in

he wanted to get that out of the way

then a drunken new year’s eve

he stayed a year and a month

he got a job in Calgary

left with a week’s notice

asked me to ship the rest of his stuff to him

but when I didn’t hear anything

I tossed everything he left behind

starting with those dirty dishes 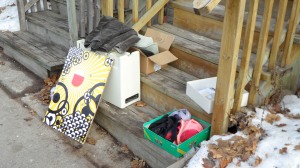 take your sad painting and get out of here