The end of Bloody Words was sad and fulfilling. There were hopes uttered by the organizers that someone would pick up the reins in the future. There was lots of buzz for Bouchercon XLVIII (2017). Wonder what sort of goodie bag they’ll have?

the nightmare: no one shows up not even the panel

The final workshop I sat in on was Sunday’s 10 a.m ‘Reality Check’ – there were two others to choose from. Each was about 3 hours long – a great way to end things, I think. A single presenter for this one. Most of the panels were 5 people – which was too many, for me, for a 50 minute time slot. 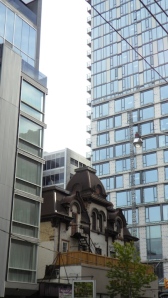 me: the old squat ignored by the sleek young things

Cheryl Freedman gave a great, informative, very interactive, talk about research on all areas of a novel – from getting the right name for the right things, to getting the cultural context correct. Never confuse American TV police procedurals for really happens in the USA & never think any of it applies to Canada.

The degree of knowledge your character would have, may not be the degree which the writer has. Just because one knows, say, detailed car mechanics, all your character may know is how to start the car, not overhaul the engine, unless that is needed for the plot itself.

my place at the table

Even at 3 hours there was more to this than we had time to delve into. One thing research did for my coal miners in love novel was change the how the other miners reacted to this ‘affair.’ I has assumed they would be enraged but it became clear that they were too busy to be really bothered at all. But that’s another blog post.

the best ending to a Bloody Words ever