Even with my last two nano novels in various stages of editing I can’t keep from thinking about this year’s model. The other’s were started pretty much from scratch. This year I’m considering go back to two novels I started at various times and have put aside.

One was started when I took Caro Soles novel writing course at George Brown – so far in the past I can’t even find any remnants of it on various computer files, back-ups or even print-outs. If there are print-outs they’d be dot matrix. Yikes – almost as hard to read as my handwriting.

Over the summer I’ve searched for this start – through old note books, old piles of print-outs & not a shred has been found. The plot is quite intact in my brain mind you but I have no recollection of character names.

One of the reasons I put it aside was a push in the class to build a present day family crisis for my hero to balance the crime he was caught up in. I found that family business too mundane to stick with but it got me bogged down, so I gave up on the novel altogether. Plus I knew who did it & why.

So I may resurrect it and do what the fuck I want to with the plot for the nano experience & then if I feel I need that family turmoil bs I may tackle it once more. The hero would be ideal for a series as well – a forensic document expert primarily dealing with photographic evidence – 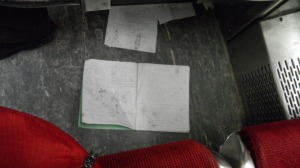 can I steal this for my nano notes

Because it helps when it’s all relative, his first case leads him into his past when I spots, on a TV show about cold cases, an old photo of himself & another boy – the boy is one of several children who disappeared around the time the photo was taken.

in ransacking my archives I came across a notebook from July 1981 – this piece was in it:

He spun in a slow circle in time to the curve of violin, his good arm controlling the speed & his good leg controlling the direction. The hot July sun glinted off the chrome of his wheel chair as he glided easily around the potted plants on the terrace.

The other patients resented him, or rather, resented the sounds of him. The brief curve of violin merely introduced a throb of rock blasted at nearly top volume on his radio. The volume matched, or is it betrayed, what I assumed to be his inner rage. Bitterness instead of courage.

Blue gym shorts & a cast on his foot was all he had on. The rest of his body brown from what must have been many previous days of wheeling in the sun. It was a [] strong body, firm, healthy, despite the obvious flaws. His left arm ending just below the elbow – it looked more like a defect, an incomplete part, rather than something lost in an accident.

I wanted to stop looking at him but the volume of his radio kept pulling my eyes back to the flex of his muscles as he spun another crazy circle in the sun.