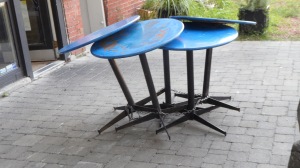 Prog rock was a force at one time, one that never really made it to the charts mind you. Bands like ELP, Yes, Caravan – to name a few – where pushing pop in what was supposed to be complex directions with lot of classical organ, piano & seemingly random structures.

BeBop, is a guitar based group – the genius of Bill Nelson on guitar. For me it was truly progressive. Starburst Finish & Modern Music are the two lps I know the best – stunning engineering, surreal lyrics & a scifi subtext propels their music. Always surprising and rarely dull I always enjoy re-listening to their work. Unlike, say, ELP, which can be a bit of a slog at times – slog prog: a new genre.

Many of the arrangements are astonishing – each line seems to come from a different song yet they cohere and take me with them with a consistent sonic flow that seems effortless. Some of the lyric writing now has a sense of the time: that ironic 70’s stance, but who cares. 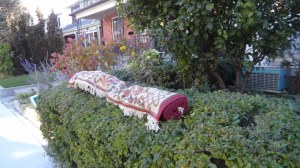 Rounding it out is a couple of Bill Nelson’s solo & other work: excellent. His Beauty & The Beast is worth tracking down. He released a new CD, After the Satellite Sings, in 2014 – every bit as good as the recent David Bowie. I also added some Yellow Magic Orchestra lps: electronica from Japan that is a delight to hear, at times a bit cheesy but without these guys there’d be no FatBoy Slim.

The radio suddenly went dead. The overhead lights flickered and went off. A few seconds later the emergency power kicked in but that was only enough to keep vital monitoring machines going.

“What the fuck is going on?” Carl’s shouts echoed down the hallway. “Did I just die or what the fuck? I thought this was a … “

“Keep calm and quiet.” the nurse pushed the door to Carl’s room open. “We have enough to worry about without your shrieking.”

“Sorry to be such a bother but what am I supposed to do? It’s not as if I can just get up and get out of here.”

“Yes, well, if it came to that you’d have nothing to worry about.”

“Janet Green. No you haven’t met me before I just got back from leave of absence. But I have heard all about you.”

“I’m sure you have.” Carl laughed. “Gotta keep you guys on your toes.”

She smoothed his bedding and headed out the door. “I have others to check on.”

“I’m sure you do Janet. But what the fuck is going on?”

“I don’t know. Got batteries for that radio?”

She let the door shut and went to the nurses station.

Don held his hand over the receiver of the telephone. “It isn’t the end of world. Looks like a transformer blew. They should have us back on line with-in the hour.”

“Just what we needed.”

“Thought things had changed while you were gone?”

The emergency power flickered and plunged into black.

“What the hell is going on here.”

Frightened complaints flowed out from the rooms on the floor.

“I gotta go down and see what’s happening.”

“You know about that sort of stuff?”

“Well, no, Janet but someone has to go down. The phones are still live anyway. You see if you can get someone. An electrician would be the best thing.”

“What about  the maintenance guy, Amos?”

“Try him at home. He might be able to help.”

Don was on his knees looking for a flashlight on a shelf under the nurses station when the lights flooded back on.