Who has time for the PanAm when Lizzie Violet, with co-host Romeo Satin, sizzle us with a night at a Luau! Luau! Luau! Romeo, channelling both Jack Lord & Don Ho – not as easy or as confusing as it sounds, was the umbrella in our cocoanut drinks as he & Lizzie surfed the laughs of an audience decked out in more Hawaiian togs than you would see on Surfside 6, or even Hawaiian Eye.

not my luau costume

Yes, it was great to see the audience get leid as it embraced the Luau theme – lots of great Hawaiian shirts, Tiki buttons, leis, sarongs but sadly (for me) no shirtless Hawaiians. Romeo Satin & the Satinets (Tessa Stone, Cynthia Gould) started the night off with the classic ‘Little Grass Shack.’

The first set of open stagers quickly raised the heat of the room. Brenda Clews with some pimp-mobile, cybersex raunch; Philip Cairns with apples in the vortex – is this the madness Snow White dreamed of until the Prince awoke her? Bonnie Bonser raged about the distant illusion of satisfaction; Jeff Cottrill was delayed in transit 🙂 with a sharp new piece that everyone identified with.

I’ve heard The Rando Bando a few times & was hau’oli to hear them again, but circumstances forced them to cancel 😦 So I got a last minute call to step in & do a mini-set :-). To keep it simple I chose some of the recent Village pieces I’ve blogged: How I Learned to Play With Boys, In The Workshop, Founders Day, By the Moose of Moses: which came together as a nice suite. I must have hit the right notes, as during the break more than one stranger was effusive about my writing (too bad they were merely effusive & not asking to buy chap books).

During the break The Satinets worked the crowd for tequila while checking for Hawaiian shirts, sarongs & the best beach wear for the contest. Kensington Market must have been stripped bare to the walls. Speaking of strip, burlesque temptress Lilla Koi: Hawaii’s own Forbidden Fruit – started a heatwave when she let more than her seat wave in an all too short set after the break.

She did a polished, sweet sexy routine to I Wanna Be Like You – Disney for burlesque, why not? Her tropical costume was strategically placed green sequinned leaves & fronds. She balanced sexiness with humour without getting kitchy. Gloves were peeled & leaves fell to reveal glittering lotus blossom tassels. Out of 5 she gets an Hawaii 5 Oh Oh Oh. 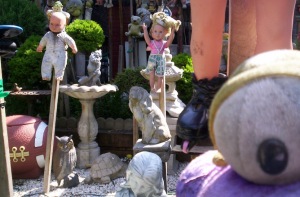 got my eye on you

The Satinettes worked the crowd again checking out Tiki buttons, yacht pants & hula hips for the contest before doing another number with Romeo – Blue Hawaii – that lead to the final round of open stagers – great music by Michelle Lecce-Hewitt (check out her upcoming benefit); Anastace & finally poetry from Shawn Sosnowski – ‘she gave me a racing stripe … then stole the car’ Winning the prize for best Hawaiian shirt he won’t missing that car so much.

Jeff Alan Greenway closed the night with a great set of piano driven pop. He has an appealing stage presence, a great voice & singing style that lets the lyric carry the emotion. His piano playing is deceptively simple, much like his singing, filling the melody without underlining the emotions or showboating to say ‘what a great Keith Emerson I am.’ He allows his songs to breathe & the crowd loved him & the songs & even sang along.

overdressed for the luau

shirtless guys in the laneway

play bball without a hoop

deke dodge around each other

as eager as my eyes are

for their pale winter skin

they can’t see me

as aware of my look

as they are of the sun

their pant legs rolled up

am I looking too long

would I look if they were

than their twenties thirties

if they were in their fifties sixties

yeah sure but not for as long

if they were younger

I have the opportunity to stare

not feel their response for

so here I stand

on a warm day

One thought on “#Hawaiian Noir Eye”