After just over four years my WordPress ‘followers’ has finally hit 100 – when I see some whom I follow with upwards of 10,000 followers I wonder what I’m doing wrong – not enough nudes, vulgarity, positivity, negativity? Or perhaps what I’m doing right – by, usually, not worrying about #’s.

The low number means people have chosen to follow the blog because they want to not excuse they follow everyone who follows them then never looks at the posts – like friending & hiding people on FB or muting them on Twitter.

As much as I’d love to have 5,000 followers I’m not willing to the the work to attract them beyond what I do now. Writing, performing & registering at events as TOpost.ca is enough of a push for me to maintain. It’s been hard enough to get show hosts to actually refer to me as TOpoet.ca or just plain TOpoet. When they do they act as if it’s some sort of joke & want to know my real name. I tell them follow my blog for the real name. They never do. 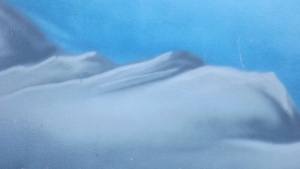 It’s like people who want to know the real poet or the true person to demonstrate their own depth of sensitivity & perception. These are the ones who confuse the ‘I’ of a poem with the person who wrote it. TOpoet is not a confessional poet even hen he writes about himself. It’s as if I’m less authentic as a writer & person because I’ve ‘branded’ myself. I guess only trans people have the privilege of changing their names & remaining authentic and the same time 🙂

Thanks for following this shallow inauthentic writer and sometimes hitting the like button & even going so far as to re-post me. The real ‘I’ appreciates it.

I didn’t think one bird

could make so much noise

in one of the mall lighting poles

a home for eggs chicks

it wasn’t a caw or a quack

the feathers were dusty black

glints of green as it darted

at car windows   side mirrors

its beak struck at reflections

chasing people to their car

then flapping to sit

on the handle of a shopping cart

as I parked it was on a car roof

gobbling up bits of a donut

predigesting them for that nest I supposed

are trans fats healthy for birds

maybe that was why it was so aggressive

too much sugar not enough roughage

just what the world needs

eager to peck your eyes out

for looking at it the wrong way

I opened car door a crack

its black pearl eyes were on me

it landed on my windshield

as the nails scrabbled to take hold

it pulled itself upright

with a shake and glared at me

another car pulled in

the beast flew to it

I got out and rushed to the mall

when I returned the bird was gone

a few feathers stuck to my car hood

I got a rag out of the trunk

alert to make sure

I wasn’t about to be attacked

I drove to the exit I saw it

the bird was dead

my tears too late for protection 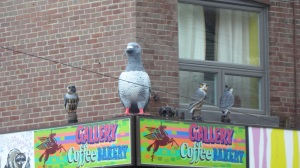 3 thoughts on “All My #Followers”