I wished him dead

every time I sat in his class

I wished he were dead   buried

not someone I had to face every day

I would only have to glance up at him

writing formulas on the black board

the drone of his voice

and wish him dead

he would always call on me

to read out what he had written

I picture his brain exploding

bloody cosines gush from his nose

all over his spotless white shirt

I wanted a sharp steel edge

to cut out his heart

save the class from algebra trig calculus

his stories of sailing

how he figured directions

with his slide rule

so we can figure out the angle

to bury you so your rotting corpse

will slump into your penny loafers

bones a jumble of secants

the formula on the board

meant nothing to me

it could have been written in flame

my feet burning by the time I sat down

he would pat me on the shoulder

say   you seem to be catching on

when I was really catching on fire

I’d stare at the rubble on my page

hope his hand would stay a bit longer

hope some of his knowledge could rub off

what was the angle of the dangle

if he were to die I wouldn’t have to wonder

about where to look

when he stood so close

I leave the class

can’t remember a formula or anything

all I could see was that glint of belt buckle

and that wouldn’t be on the exam

This is based on memories of my high school days. The teacher is question is a merge of a couple of male teachers I had at different times, in different years. One taught English for a year & was gone, the other taught chemistry, I think, here I’m a bit unsure. I do recall the writing of formulas and the bulk of shoulders.

These two stood out because they were young men both in their first year of teaching. All the other teachers were older men & women, some of whom I really did wish were dead, or at least sick for a month or so, so we would get a substitute. Preferably male.

In high school it was pretty clear me that I was into men. Sneaking glances at cocks in the shower room before & after gym classes. In memory, one of those teachers presented a nice package when he leaned back against his desk to face the class to instruct. I’m not sure if he was at all aware of it though & if he was, it was probably for the benefit of the young ladies of the class.

Math was not my strong point. Thank God for calculators. I know now it was more to train the brain in logic than to give me information for future use. I have never had to do a trig function since leaving high school. I was a lazy thinker even then, given to losing focus easily as my eyes wandered & wonder about ‘dangles.’ 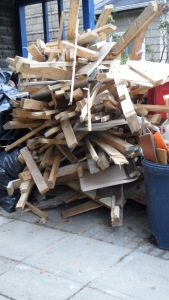 Much of the imagery comes from the adult writer, not from the teenager. ‘written in flame’ is a reference to the Ten Commandments – it adds a Biblical resonance to growing up queer. I love the title because by the time you get to the end of the poem you know exactly what root I wanted to square off with.