Charlie C Petch returned Hot Damn! to it’s Glad Day roots for the March edition of the series. Glad Day, now moved to Church St., has created a multi-functional space with a cafe, books store & performance space. Hot Damn! audience filled the space for a hot standing-room-only show. A space created by having books shelve son wheels & moving them when needed for performance. A great idea that however suffers from noise bleed – often the cafe chatter distracted from the poets on stage. 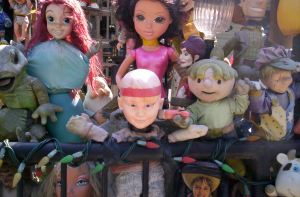 Some lines from the first open-stagers & first round of the slam: ‘pretty … existing only to titillate’ ‘I realized I wasn’t a girl two years before I came out’ ‘I am a customer service smile’ ‘feel like the wrong end of a firing squad’ ‘a broken bbq that plays Pantera’ ‘Dr. said I don’t look like I have a disorder’ ‘you’re counting sheep & I’m counting calories’ ‘we’re to look appetizing but have no appetite’ ‘I thank God for my queerness’ ‘we’re made in His image so my adoration of your body is adoration of Him’ ‘as if saying that validates you’ ‘I don’t give a fuck about being liked’ ‘labels are divisive’ ‘ptsd like a pistol pointed at the back of your head’ ‘I live a life my dealer has a solution for’ ‘when you need the money you learn to like the pain’ ‘cactus … their sharpness doesn’t keep them from blooming’ ‘she had big tits, a bad attitude – everything a girl like me looked up to’ ‘it was a good way to pissing my parents off & a good way to die’

I did my set. Now I can’t review myself but I can review the audience – which was receptive & appreciative. I did drop one piece – Reaping Victory – there had already been enough political stuff I didn’t feel like adding more plus my set was proving to be more serious than ever I wanted it to be. So the raunch, when it came, was a relief to most of the house. Hard On got consistent laughs starting with the title. I sold a good number of chapbooks but do have some left for those of you who want to buy one. 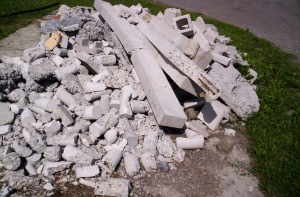 After a break the second round was launched. ‘it doesn’t matter that I don’t remember – I keep getting back on but why’ ‘sharp line between my world & yours’ ‘how we failed to make you happy’ ‘it’s not that easy with you but I want you to stay’ ‘I’m running late but I’m not a coffee drinker’ ‘turn the attic into a dungeon’ ‘sure I have a flogger I can share’ ‘a social-cuddling-but-no-sex room, ‘I feared butch on butch as much as I desired it’ ‘I walk narrow’ ‘lips sucked back like curtains’ ‘when she tries to speak it comes out white-wash’ ‘native paid back by a credit on our taxes’ ‘cats aren’t aloof that just have low tolerance for assholes’ ‘tick-tock do you hear the sound of motherhood’ ‘I was never the son my father wanted but became the daughter he always wanted’ ‘can’t talk about my father outside the smilies I grew up with’ ‘if I hate my body does that make me alive’ ‘I have run out of swipes on Tinder’ ‘dating apps is one of the few places where I feel seen’

The evening’s winner was The Illiterate Poet. The season finale will be Saturday April 15 at Buddies in BadTimes with feature Queen Sheba. The winner of the season will be transported to Capturing Fire in June. 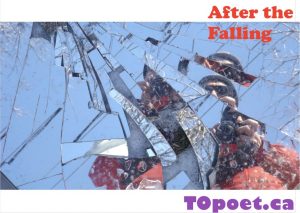 I have a hard on

& I can hide it behind my books

or tie a jacket around my waist

yes I do have a hard on

that is an erection

yes it is very hard

you aren’t the landing pad

I’m not even pretending I am

what more can I say

no I don’t find you repulsive

but it’s not you

that’s making me so hard

when you kiss me

when you pinch my nipples

anyone can do that

and I would get erect

so it has nothing to do with you

you can ignore my hard on

I wish you would

just take your hands off my balls

stop licking the head of my dick

I didn’t take my clothes off

for you to give me a blow job

take your clothes off

for that reason either

it was just something to do

I didn’t come here to have sex with you

that was the last thing on my mind

I’m not having sex with you

to make you fall in love me

I don’t want to be in love

I don’t have the time for that

we can control ourselves

we can ignore these erections

and get on with our conversation