Putting together the Hot-Sauced set I’ve started with the bones of my Hot Damn! set. I’m keeping some of the pieces, cutting some to create a different flow feeling. The bulk will come from the new chapbook but I’m including a different pieces & even adding a Laws piece that isn’t in the chapbook.

Pieces, at this point will be: Dead Already, Give Generously, Chalk It Up To Experience, Square Root, Win/Win, Re-Creation, Spoilers, After The Falling, Hard On, Sermon on the Mount, Breaking in Grief. 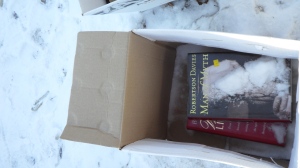 I cut my favorite ‘Man in the Moon’ to make this set less ‘in your pants’ sexually. Sometimes even I like to hold back a little. I will start the same way & end the same way though. The added pieces echo off the ones I’ve kept. Square Root, like Chalk, is about a math teacher. Sermon, like Breaking, is a piece about my Dad.

In going over the pieces I’ve stepped back from the angry old coot to give the ‘no holds barred’ pieces more space to be heard. When every other piece is pitched at the same intensity all people hear is the intensity & not the words. 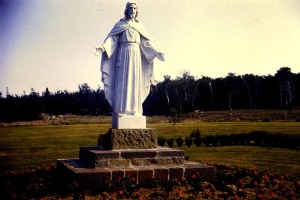 Sermon on the Mount

when I was a child

I remember the excitement of the day

arms open to greet you

my Dad was a sales manager

a cross Canada chain of cemeteries

I grew up under that shadow

not that he dug graves

that shadow didn’t bother me

I was an odd child already

the cemetery was divided into grottos

bronze plaques instead of tombstones

was the trademark Memorial Gardens look

that and the white marble

religious statues for each of the grottos

DaVinci’s Last Supper in the Gethsemane

greeting people at the entrance

for the Sermon on the Mount

for a first few years

while things were being put into green shape

the Gardens were my playground

I remember the excitement of the day

the garden workers pushing Him

arms open to greet you

arms that would never close

I was drawn to his eyes

he had comma pupils

that told me nothing

I longed for His embrace

but at that time

I was too young to understand

but a carnal love

I had no language for

when I had a language

I still longed for men

who could never enfold me

One thought on “Hot-Sauced Sermon”