Thursday, Day 3, started the same way as Day 2. Routine morning at hotel, over to DuPont Club for a meeting, back to hotel to freshen up. Double checked route to the Smithsonian Air & Space Museum. Transit to Union Station. Bought a bottle of water & started walking & walking & walking.

I didn’t realize that there were two First streets 😦 one NE the other NW – so I went east instead of west.I did get to see parts of the city I never would have seen. It took me an hour to get turned around in the right direction. Let me tell you I nearly gave up & called a cab to take me back to the hotel.

Yet I persisted & finally found it. First stop washroom – blasting my piss into space – well maybe not – I think they missed an opportunity there. History of Air on one end, Space Travel on the other. After watching a doc on the Cosmonauts I was pleased to see some of the Russian rocketry there. Along with Yuri Gagarin’s flight suit – it was hung in such a way that it made him appear a foot taller than he was. 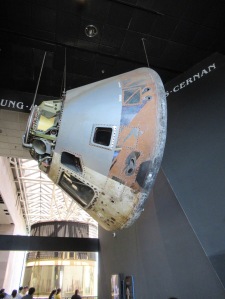 The place, much like the zoo, was swarming with matched tee-shirt tour groups of children/teens. People blocking one another views to take photos. If they could aha they would have been climbing into the cockpits of the suspended planes. It was fascinating.

The history of air wasn’t as interesting. Lot sou planes suspended. Jets. Bi-planes, even a hot air balloon. A little too much of the science & not enough of, say, the history of airliner washrooms or flight crew uniforms. Worth seeing though. Of course my final stop there was the gift shop. Where, amongst other things, I bought an amazing 24 ounce travel mug for my next return trip home to Mars.

more pics: A Visit to Space