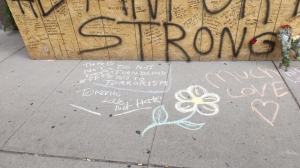 I live close enough to the Danforth mass shooting that I had phone texts & emails checking to make sure I was okay. The Danforth/Logan intersection is about a 20 minute walk from my house. I pass it at least three times a week on my morning walks. Walking the Danforth is like a trip to the United Nations with restaurants & stores representing the world – Mexican ceramics, Nigerian batik, lamps from Nepal, food from assorted provinces of Greece, Italy, desserts from France. From Broadview to about Jones it is primarily Greek & Italian; Jones to Greenwood is Islamic; Greenwood to Rhodes has become Ethiopian; from Coxwell to Main – anything goes. 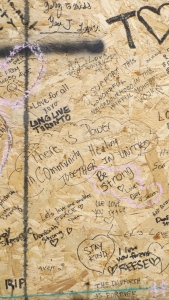 I once tried to count the number of places to eat between Greenwood and Broadview and lost count at over 400 before I even got to Broadview. Not for dieters, though there a few vegan spots in the mix. No I haven’t tried them all 🙂

I didn’t hear about the shootings until Monday morning when I saw that someone I knew had posted they were safe on the Facebook ‘I’m Safe’ page. I read what they were safe from & was, I want to say shocked, but it was more like dismayed. I changed my Monday route to the opposite direction – I didn’t want to deal with gawkers, police investigators & the like. 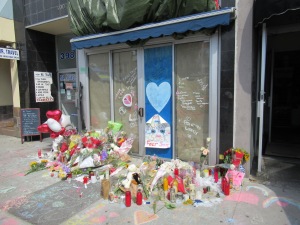 I went through the area on Tuesday, as I ordinarily would have anyway. Took photos, as I ordinarily do, only this time there were the memorials & walls of graffiti to photograph. I took pictures until my own grief made me put my camera away. #DanforthStrong #GreektownStrong were on the walls.

I’m not sure what they mean – usually to be strong in the face of death mean not to show your emotions – be strong, don’t let anyone see you crying. The Greeks and the Italians are wailers – there were people weeping as I walked through. Were they not being #strong?

I walked through again on Thursday, also a regular walk for me, took more pictures as the memorials & graffiti increased. I felt the sense of community grief & loss. I was not #strong & stopped taking pictures when I became tearful. Reporters on TV keep asking people – ‘do you feel safe?’ Putting words into the mouths of the people they’re interviewing. It seems, to the media, that feeling safe & strong is more important than feeling grief.