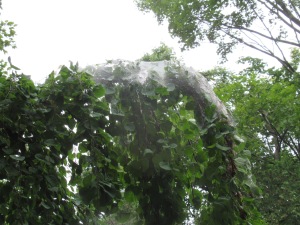 I have seen several productions of The Tempest – some at Stratford, some on TV, at least one Shakespeare in the Park, plus a few film adaptations. The last one I saw starred Christopher Plumber at the Festival. So the play holds little surprise – the pleasure is in the telling.

My favorite Shakespeare character is in this play. Caliban, the true outsider. A creature with human foibles but abused and/or found repulsive by all humans. I’ve frequently found Ariel irritating as opposed to delightful.

Over all this is a solid production with some wonderful over-the-top moments in Act 2. Martha Henry is a fine Prospero – though I would have liked a bit more bitterness, as opposed to the simmering anger but it is good to see her take on the character. There is real chemistry between Mamie Zwettler and André Sills as the young lovers Miranda and Sebastian.

André Morin as Ariel give a good performance – perhaps the tree bark costume grounded him as one of the earth spirits. An apt costume for a spirit freed from a tree. Michael Blake as Caliban, costumed with barnacles, clearly a sea spirit, is strong but comes across more pissed off than vengeful. As with Prospero I would have liked less amiability – they are too likable 🙂

The rest of the cast gives nicely detailed performances & as always the reliable stalwarts Stephen Ouimette & Tom McCamus are fun as Trinculo & Stephano – there is always bring great comic chemistry between the two of them. 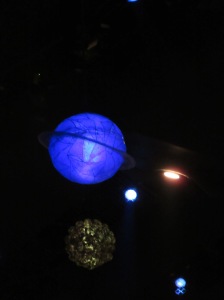 The colonizing subtext of the play has become more troubling over time – much like Tom Sawyer/Huckleberry Finn it is becoming more politically charged & I wonder how soon it’ll be before The Tempest gets banned. But that’s another blog post. It is still a fun production & well worth seeing.

ps – Some of my focus was distracted repeatedly by a member of the audience who had no hesitation in taking out their cell phone to take pictures of the action on stage – I missed the moment of the entrance of the Harpy with the turning on of their camera screen to get some shots. When they started to do this yet again someone nearer to them leaned over to stop them. At least the photo taker didn’t start to share their pics on social media during the show. How considerate.

The Hound of the Baskervilles: Entertainment Afoot