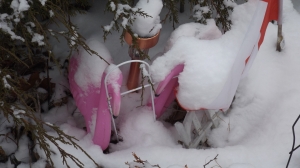 do you remember the day

we jumped from second-story windows

into heavy piles of snow

banks barely dented by our bodies

you, the favorite cousin

you didn’t want to jump

‘Kitten Kitten I got your mitten’

you jumped just to shut me up

it was a week of so much snow

that  streets were so covered

on the old toboggan

flew down hill to the pond

the danger of suddenly cracked ice

Meg was downed there last year

you said it was haunted

we crept quickly past it

I said I could hear Meg calling

‘Kitten Kitten I got your mitten’

you pushed me back toward her

the snow was softer there

we sank deep into

it rushed up our legs

held us pulled us trapped us

in the back window of a car

you had to pee

I helped you pull down

and saw your little red cock

the stream of yellow

as it hit the snow

‘Be careful’ I yelled as I pulled away

‘Your turn’ you dared me

‘Or do you need a mitten to keep it warm’

so I did it too

around the moist warmth

that my pants had held

out of your yellow splotches

neither of us had enough to

write a name a note a memento

we stood a moment there

our dinks dangled in the cold

looking at them and then each other

it began to snow again 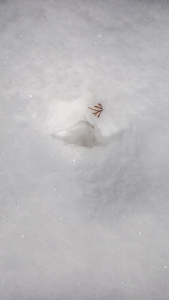 So much of this happened to me – I do remember winters in Cape Breton where I jumped out of a second-story window – actual it was more like a dangled out then spurred away with my feet to land on my back – inot the snow. The windows in our house weren’t large enough to really jump out of head-first.

At least once a winter Toronto gets enough snow to turn cars into snow humps but never has gotten to the point where one is walking shown the sidewalk between mounds of now so high to can’t see over them. That would never happen as snow removal favours cars & sidewalks would be made impassable. Toronto’s war isn’t on cars but on pedestrians. But I digress. 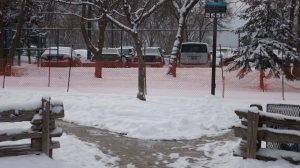 I did have a toboggan that flew down hill, there was a pond where some little girl had fallen through the ice & drowned but it wasn’t that close to where we lived. I did get stuck walking through a snow bank. I did piss in the snow more than once rather than wet my snowsuit. 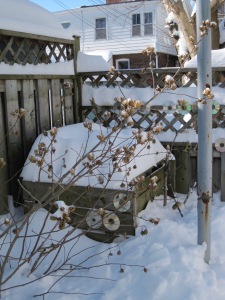 The piece is one of several in which I allow early age same-sex attraction happen with innocence. I’ve read enough hetero poetry about this sort experience – most of the queer stuff involves trauma not innocence. Before I knew what it was I need feel a real curiosity about boys at an early age – I did a bit of peeking but that was all. When I found a name for it replaced innocence with shame. I love the last line ‘it began to snow again.’

Also, I hate to break it to you, but there was no cousin. Our family had no relatives in Cape Breton.