For my final day I kept it simple. I’d seen enough scenery for one visit & it was time to send some postcards. But that was not so simple. The past few days I’d kept my eyes open for those revolving racks, hoping for iconic cards of pipers over-looking the Canso Causeway. But these racks have vanished 😦 People are sending so many selfies & Instagramming that the postcard industry has about vanished. But I did find some at CB Curiosities that were too tasteful but did the job. 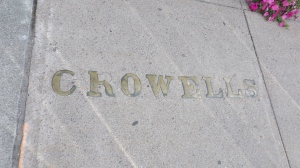 I realized that some of the shops on Charlotte St had closed because they were family run businesses that didn’t have family to run them once the parents had retired or passed away.

I stopped in at Rita’s Tea Room, moved from Big Pond to Sydney, where I had a coffee & a couple of freshly baked oatcakes, while I filled in my postcards. I posted those & continued on my way. Stopped at Ed’s used book store & bought some Whitman books. These were YA of the early 60’s, many were authorized novels based on TV shows. These hold lots of memory – of the ones I bough I did have, at one time, the Tarzan, & The Rustlers Fort.

I continued on my way up to my sister’s where she had lunch ready on the stove. She also had a couple of boxes so I could mail some things back to Toronto so lighten my luggage. One box was the books I just bought, which cost me more to mail than I had paid for them 🙂 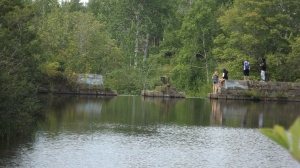 After lunch we did a last hike through Rotary Park, which is now a nicely laid out set of trails. As kids, my pals & I would bike up to swim in the reservoir. Which it turns out still happens & even some of the original dam is there, complete with kids hanging out – though it didn’t look like they were there to swim.

In the Park we also came across some wild blueberries, & even saw some people filling up bowls with them. I had a handful of the ripe ones. Not as good at Tim’s blueberry donut 🙂 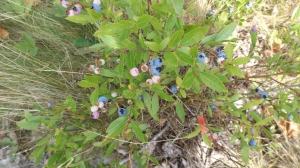