when I was a young boy

I liked to sing

used to do it a lot

on my way to school

with my dad when we went fishing

with my sisters when they got old enough

we would sing bits of songs off the radio

sing along with records of my mother

each trying to out sing the other

you with the stars in your eyes

you with sausages in your eyes

it always broke us up

you with the bananas in your eyes

don’t monkey with my heart

you with the beans in your ears

can’t you hear I love you

the children’s choir at church

was looking for new members

it would be great opportunity

I could learn to sing for real

learn how to carry a tune

instead of burying it under volume

a bunch kids at the church hall

were lined up according to height

mostly girls and some boys

we where given a song sheet

words between dangling fangs of music

just worry about the words

a woman played a few notes on the piano

we started in with a din

a few tries and we worked through it

then girls only  boys only

some got a nod from her

my turn she played a few notes

no no no this note

finally she gave up

thank you but you really can’t …

blood rushed to my face ears

the other kids gawked at me

I ran out ran home

I never wanted to sing

except for the occasional

you with the fingers in your ears

Hey there, it’s a bonus – a piece that didn’t make the chapbook for space reasons 🙂 This is a mostly true incident with some poetic licence. My mother was a big Mario Lanza fan, we did sing along to his albums. Hey There was a big hit for someone – I thought it was Perry Como but maybe it was Frank Sinatra. The way we would fit our own objects into your eyes happened every time we sang it but I doubt if we were ever as inventive as I make out here.

My mother would rarely join into our vocal gymnastics but Dad always did. I can recall when he took us kids for Sunday drives we would sing ‘Yellow Submarine’ (for some reason) endlessly. The drives were probably to get us out for under our mother’s feet for a couple of hours because she rarely came with us. 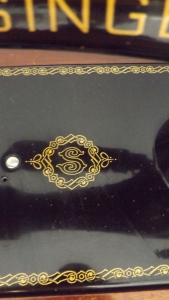 I did go to Sunday school and that’s where this ‘audition’ was announced. We were to come on a night during the week. It was clear who the ‘conductor’ wanted to audition as she named off some kids she wanted to make sure would show up. But I went anyway. I told my mother about it & she said something about carrying tune.

The audition was not as organized as I make it here. The kids who had been given the nod earlier knew somethings about music already like rests & stops. They might have been her piano students already. Budding prodigies. ‘dangling fangs’ is clearly the poets image not the little boy. I just though they look scary & incomprehensible. Each of us did get a solo opportunity and that was the worse part. All I remember was being too nervous to get any volume. My departure from the audition wasn’t quite so dramatic. Several off us were given the boot.

I told my mother they had enough boys so I didn’t get picked. We didn’t continue to sing Yellow Submarine on our drives. I did not choose to become a professional singer 🙂

The Past Catches Up https://wp.me/p1RtxU-3Ip