The Saturday of the unveiling was a windy overcast day. Rain threatened but never happened. Steven had been buried in the family plot at Hardwood Hill Cemetery. The bagpipes could be heard as she and Clara walked up the path to the family plot.

“Mama was a Presbyterian you know, and never converted, so when they wouldn’t bury her on Catholic soil our father didn’t want to be buried anywhere but her side. I know Steven felt the same way.” Clara leaned on Lillian for support.

There were several others already at the site. The Nova Scotia flag covered the small stone monument. It bellowed in the breeze.

“Thank you Mr. Crookshank.” Clara shook his hand and nodded to other men there.

“He will be sorely missed.” Gus shook both their hands.

They stood in the wind for a moment listening the the piper. Clara signalled for him to stop.

“Lillian would you give me a hand?” Clara indicated to Lillian to stand opposite her by the grave stone.

Once Lillian had taken the edge of the flag in her hand Clara leaned and undid the string that was holding it. They lifted it together and Lillian, expecting Clara to hold it, let go of her side once it was clear. Clara let go of her’s at the same time and the flag was blown away by the breeze to get stuck in upper branches of a near by oak tree.

“Oh my!” Lillian said and started to get it.

“Leave it for now, dear.” Clara said putting an arm around Lillian’s shoulder.

The monument was pink-grey marble column, the top edge had an inlay of black onyx carved to look like lumps of coal. It was topped with miner’s lamp made of brass.

Clara read the inscription, “ ‘Greater love than this no one has, that one lay down his life for his friends. John xv:13’ ” Then she began to weep. The bagpiper began to play.

Lillian squeezed Clara’s hand and they walked down the path. Followed by the others and the bagpiper.

The silence back at the O’Dowell house was a relief to Lillian. She’d said all she had to say and longed to be on her way. It was worse than those last days at school before summer vacation. Clara had taken to her room and Lillian brought up a supper tray for her.

“Lillian you must understand how hard this is for me. To lose Steven and now to lose you so soon after.” she patted Lillian’s hand. “I know I’m beginning to sound same as an hysterical old woman but …”

“I will be back Clara.” Lillian hoped she sounded reassuring.

“Yes, but not till Christmas. Oh, do see if you can take some time to visit while you are at college.”

“Yes, yes.” Lillian said. “Once I know what my classes are and what work I’ll have before me I’ll know what time I have to spare.”

“This house has been so empty without you or Steven to share it with.”

“You’ll get used it so quickly you won’t want any intruders other than a cat or two.”

She went down to the kitchen

“Don’t awaken Miss Clara, Aileen.” she said. “I think it best if I slip away with less fuss than I arrived.”

“Yes miss. Am I to send the things in your room along to you?”

“No. They’ll be there for me when I return. Knowing my favorite blue shoes are here is sure to bring me back. I’d like you to have these.”

She gave Aileen the pair of stocking she had bought for the wedding. One less memento of a time she hoped to forget.

She planned to leave Monday morning. Being here had become unbearable for her now that her escape from the island was assured.

“I can’t quite believe you are going.” Mrs. Franklin said as they waited on the boarding house porch for the cab to take Lillian’s luggage to the train station.

“I am so grateful for everything you’ve done for me Rose.”

“Oh  …” Mrs. Franklin pulled the tissue paper off what turns out to be an ornate carved ivory fan. “It is beautiful. The roses look so real.”

“I realize it isn’t that practical. Much like me, I suppose, I was brought up to be pretty but not practical. Life here has taught me to be practical.

“It was a gift from my father. He bought it for me on one his trips to the continent. I don’t want to have too many impractical memories.”

The cab pulled up. Once her luggage was safe at the train station she had the driver take her to the cemetery. She had given herself time to go back Steven’s grave. The day was sunny but the wind was strong around the grave.

As she knelt the wind pulled off her hat and her hair came loose. She laughed to herself thinking that Steven always did appreciate her hair.

“Steven,” she said softly, “forgive me for what I am doing. Even if you had lived I would never have been content here on this rock with you. Never.”

“Lillian?” a man’s voice came from behind her. “Lillian McTavish!” The man repeated louder.

She stood, shivering, and turned around. The sun was in her eyes.

“Steven!” Had she brought him back to life?

“It is you, Lillian! I thought it was a ghost.” He took her in his arms. She tried to push him away.

“David Henderson? No, it can’t be. It can’t be.” She stumbled back away from him.

“When news of your death reached me in India I was devastated. I had hoped to return to Boston one day to be with you. I should never have let my family pressure me into leaving you. Never. It was torment I shall never want to experience again.

“I could hardly sit through the memorial service your uncle conducted in Boston. It wasn’t right to me. I had to see your grave to … be near you one last time.” Tears streaked his face. “To find you alive! How is that possible.”

“My uncle was … mistaken.” Lillian stared hard at David. He looked much she remembered. Older and less naive.

“He said at the memorial that you had been interred here with the other flu victims. I now see why the custodian was so puzzled when I asked about Lillian McTavish’s resting place earlier. He said that if you were here today it might be up here at the O’Dowell plot.”

A nearby church rang eleven.

“Tell me that my affections might still be returned.”

She started to walk down to the street. “Much had happened in the past year David. I can’t say what my affections are for anyone.”

“I understand that Lillian. I do honestly.” he stopped her and took both of her hands in his. “We can become reacquainted.”

He let go of her hands, put his around his waist pulled to him and kissed her.

The wind wrapped her hair around them for a moment. They broke free and she quickly plated her hair and secured it under her hat. Was this Steven’s answer to her prayer for forgiveness?

“As you always were.”

They got into the cab that she had waiting for her. “Train station please.” Lillian said.

“That may be, but my train leaves at noon. I intend to be on it.” Lillian’s thoughts were reeling with this unexpected, undreamed of event. Regardless of it she was determined to leave. “I can’t make any decision or plans as long as I am here.”

“I know that Lillian, but please hear me out. After my father’s death I inherited the firm and have increased its holdings in India considerably. When I first met you I was a young man with possibilities, now I am man of property.”

“I can see that. I presume you know that I was compromised by James Dunham.” She saw no reason to hold anything back from David.

“Yes. Do I have to explain that for you? That’s why I ended up here. I had a child by him. It was still born.”
“Lillian,” he clutched her hand and brought it to his lips.

“Do you still want to be become reacquainted with me?”

“How could you doubt it?” He said softly.

“You are free to come with me. I am not promising anything.”

“Yes. yes. Thank you. Drop me at the Royal and then take Miss McTavish to the train station.” The cab pulled up at the Royal. He jumped out. “It won’t take me long to pack my things and I’ll meet you at the station.” 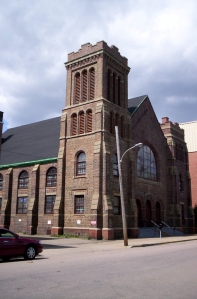