is this the last wrap

the first wrap was a tissue

I used that wrap

layer after layer of

‘how can i make you happy’

rather than add another layer

hoping nothing had caught

no thread was snagged

that all anyone wanted to hear

‘this bandage solution will do’

‘you deserve to be fixed first’

peering at life though the slits

surrendering to the weight of history

pushed along by an unquestioned past

controlled by the clasp of gauze

layer upon layer after layer

some turned to dust

some turned to scar

some turned to face the sun

dust motes settling in the moonlight

‘how can i make you happy?’

‘how can i unravel the book of life’

this scar tissue of lies

This one was written October 2017 before I watched The Mummy (1959), then worked on the next day after I watched it. In the movie the resurrected Kharis sinks into a bottomless bog. He sees no wrong in what he has been done. His self-sacrifice is unquestioned while none of his victims acknowledges that the mummy may have any sense of self. Not that he gives anyone an opportunity to reason with him. He was ‘pushed along by an unquestioned past /by ritual expectations.’ 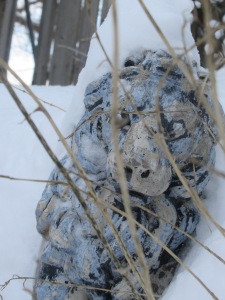 The piece started with that image of bandages as a tissue of lies. The prime lie being the self-sacrifice lie ‘oh i’m fine’ which come out of ‘the weight of history.’  Culturally men are to keep their real emotions, except anger, under wraps. Questioning the history is to cast doubt on one’s real manhood. It is better to sacrifice than surrender.

It’s so easy for people to accept ‘i’m fine’ without questioning it. Kharis is a man sacrificed to protect the princess he loved. He is a type of zombie compelling by spiritual forces not by his own mind. Not questioning our male history makes many men into zombies fulfilling the prophecy of male stoicism.

I play with metaphorical bandage images through the piece twisting them round each other the way a mummy is wrapped to point where one no longer knows who is actually under those bandages. We never see the ‘naked’ man only his eyes through the slits – a sort of tunnel vision.

There are some direct references to the 1959 film as well – there is a ritual to resurrect Kharis, it is read from the book of life, he then hopes to resurrect the princess, his one true love. This hetero love is found in nearly every variation of The Mummy – of course the hero’s fiancee always looks like the dead princess etc. All caught in a powerful plot devise nearly as confining as the layers of wrappings.