on a busy sidewalk

someone with a knife

while the victim collapses

the flash of it

people stepping in it

as they step over the body

on their important way

over the expanding trail

over carpets in hotel hallways

blood gets on hands

the fingerprints on mirrors

the blood travels around the world

with the outline of the body

is a pool of blood

after crime scene photos have been taken

after cellphone photos have hit the net

city workers come to clean it up

the camera looks for the stabber

almost dripping down the walls

seeping out of TV screens

lead up to a door

you reach to open the door

Much like Psycho Zombies in the Rain this piece is very cinematic – in fact it includes camera angles 🙂 The opening is one that I saw decades ago in a movie about a serial killer, I think. My memory of the plot is rather vague of what happens after the victim collapses other than people annoyed & reacting as if the victim was drunk not dead.

The rest is inspired by CSI, when I used to watch the show, by how they followed clues to unexpected locations. The poem is a list poem of various places this blood could have been tracked to. I realize it probably wouldn’t stay on shoes long enough to get where I take it, or that it would stay wet enough either but this is poetry not a text dealing with blood spatter theory. 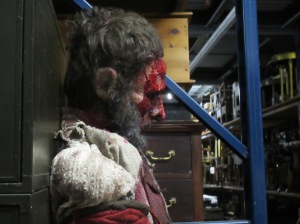 Each of the bloodied locations would get its own screen time while the audience sorts through the clues to figure out which ones are relevant because narrative logic dictates that some of these locations must pertain to the identity of the killer. This is one the frequent plot ploys on many detective shows – too many clues to sort through. 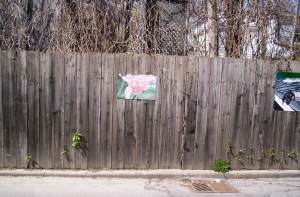 I like the overhead camera view of the corpse with all these foot prints leading away from it. Prints made by people oblivious or perhaps indifferent to the body, to the crime & later miffed by having to clean the blood off their shoes.

The ending is a riff on surprise endings where the narrator turns out to be the killer – it is a bit of a cliche mind you but I couldn’t resist. Here it is ambiguous – has the killer come to your door or have the bloody footsteps lead the police to your door? Either way you’ll get what you deserve 🙂