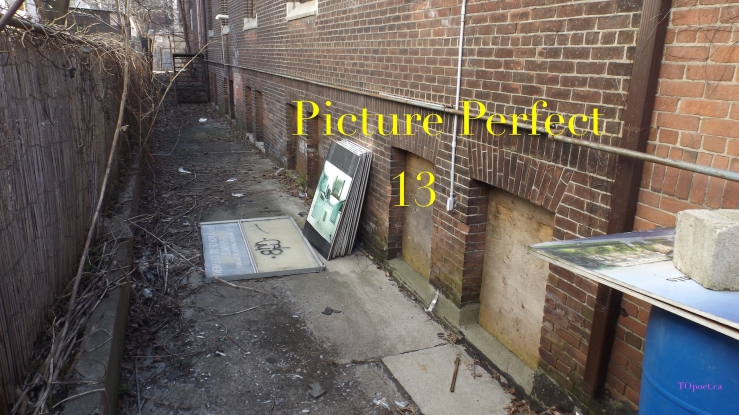 Without looking at any of the other pictures he gathered them together and put them back in the envelope. Now where to put them?

No! He couldn’t put them away until he saw what else was there. He took them out and quickly sorted through them. There were twelve from the whip shoot. In the last picture the man’s boxers were around his ankles and the whip marks on his ass were clearly bleeding. By that last shot the woman’s hair had become dishevelled, her nylons where loosened from the garter buttons.

He had sat on the chair in the pictures many times. His Dad used it when taking portraits of families. There was no doubt in his mind about where these were taken. The backdrop was the scrim he mother had ordered from a photo supplier in Montreal. It reflected the light just right and didn’t call attention to itself.

Time to put on my forensic hat. Had his Dad taken these or merely developed them and kept copies? Dan got one of the studio pictures he knew his Dad had taken of him and Linda. There they were by chair, each with a foot on the seat and grinning at the camera. The chair has the same smudge on the back left leg. He turned the paper over and it had the same subtle watermark as the whip pictures. They were taken by the same camera.

He could see the camera set up on its tripod in the studio. He taken lot of pictures with it himself. Climbing up on that very chair to look through the view finder. Playing with the focus. His Dad didn’t want anyone to tamper with the tripod.

There were no colour pictures in the hidden envelope. Black and white could be easily developed by his Dad. Colour was possible but more expensive and had to sent away for developing. Racy stuff like this would probably be reported to the police if one of the reputable developers had gotten a hold of it.

He took the photos over to the scanner and fed them in. He watched on the monitor as each was converted. He played them back as a slide show to which made him think of the gif program he’d tweaked so he transferred a copy of the file to that, instructed the program to do fill in – it would take what photos it had and create new versions that continued in an action. It worked best if the action in the originals was fairly similar from shot to shot. The program informed him it would an hour to complete the task.

He went back to the stills for one last close look. Something in them caught his attention but he wasn’t sure what that was as he flipped from one to the other. Then he noticed that the woman was wearing  a simple bracelet in the first four pictures but as the flogging proceeded it was gone. Did the clasp break? Or did fly off as she worked that guy’s ass over?

On the other workshop computer he isolated the bracelet and enlarged it and enhanced the image at the same time. He recognized it. He’d given it to his mother for mother’s day!

He pushed away from the computer. His mother? That couldn’t be his mother in those pictures!

He dropped a proportions grid on the first of the pictures. He typed in the approximate dimensions of the chair and calculated the woman’s hight based on that. Even in heels his mother wouldn’t have been that tall. But to make sure he found a beach picture of the his mother from the time and had the Proportions program compare the two them. It concluded that they were not the same person.

Then why was the woman wearing his mother’s bracelet?

He’d bought it at the Kmart that had opened recently in Sydney. They might have sold hundred of them, well at least dozens of them. He’d gotten the notion to buy it from one of the other boys in his class who had bought one for his mother.

He stood, stretched and walked to the window over looking the street. What did he know now? Other than the fact that his past was being seriously re-appraised, he was no further ahead in the finding out what had happened that summer. Right! He had forgotten to check his Dad’s travel records for that summer.

A quick search and he found them where he expected them to be. No secret symbols appeared in the notes for that summer.

His notes for the abducted children said that Timmy was reported missing on Tuesday of that week. The family departed Stellerton Friday of the same week. That’s why the departure was so rushed. They left within days of the disappearance. The photos of him and Timmy were dated on the back for the Sunday before they left. These were probably the last pictures taken of Timmy.

Dan wiped away a tear. He’d lost a] his best friend at the time and didn’t even know it till now. Not only that but now felt his own past slipping away.

Friday was Dan’s least favourite day of the week. I was the day he worked at the FairVista location. It was his own fault for insisting that he be there at least once a week to run a ‘camera clinic.’

“Ms James isn’t here again today Dan. She called to say she might in by lunch time.” David O’Neill, her assistant manager apologized.

“Figures.” Dan shook his head. Since the Cuppa visit he’d been unable to make contact with Linda. He’d left messages, texts but so far no response. Not that he was surprised after the stunt she pulled to get him out of the way. But even this avoidance was bit much for her.

“Did she tell you anything?” Dan asked as he watched people arrive in the store.

“Just that Anne was feeling much better.”

“Anne?” Anne was the oldest of Linda’s children.

“Oh! I thought you knew. Anne is in Sick Kids. Fell off her bike. Hit her head. They were afraid there might be a concussion so she’s been at Sick Kids the last couple of days for observation.”

He had arrived at the FairVista shop that morning looking forward to finally confronting Linda about the Cuppa deal.

He googled the Sick Kids number, called the patient inquiry number and asked for Anne Tanaka’s room. He was patched through and Linda answered.

“Hi Linda. It’s Dan. I’m at the shop and was surprised not to find you here.”

“Good. Very scared but as it turns out nothing to worry about. No concussion.”

“Is it Daddy?” He could hear Anne in the back ground.

“No, baby, it’s Uncle Dan calling to see how you are.”

“Hi, Tiny. You gave us all a scare.” He didn’t want to let on this was all news to him.

“Me too. I loss consciousness for five minutes. Five whole minutes. I was just riding along on my bike when this dog dashed out in front me and I swerved to not to hit him and ran right into a car that I didn’t even know was there. Good thing the car was parked and I flipped off the bike and landed and hit my head and the dog was licking my face when I came to and he was so cute. And …”

He let her ramble on for a minute or so.

He looked around the store to see who might be there for the ‘camera clinic.’ If there was enough people he would show them the latest in technology, how to integrate it with what systems they already had. Each week they’d showcase a different camera. Ten people took the seats provided for his demonstration.

The presentation did sell a few items, some software. They often became Q&A with people wanting to know what the fuck to do with the cell phones and tablets that kept sharing information they didn’t want shared. He did his best to keep them focused on what he knew, not what they wanted him to know.

Friday was also the Lyphend ‘by appointment’ day where he discussed their line with prospective buyers. These he enjoyed greatly, as many people thought it was like buying a car. They would try to negotiate but there was no such thing as discounts even if they wanted fewer features. Lyphend did have a line of cameras for the public, along with other household electronics made to their exacting specifications. Not cheap by any means, but all designed to out-live their owners.

The morning session made Dan aware, once again, that too many people found it challenging enough to turn the flash off on their digital cameras that explaining how set fStops was almost a pointless digression. He did show them how easy it was to do on most makes but couldn’t answer questions such as ‘why don’t they make a digital that does all that for you,’ when he had, in fact explained how the auto setting did that.

The best he could do was say some camera can become intuitive about the most frequent users needs, none were mind readers. A camera still had to be pointed somehow to take a picture.

After the session was over he worked the floor. Stopping to chat with customers, answer questions. He aimed to make at least two sales whenever he was at FairVista to demonstrate to Linda he wanted the location to succeed. Plus he liked the rush of selling, especially when he could encourage the customer to upscale what they wanted.

Selling $750.00 cameras was easy enough but getting them up to $1750.00 was rewarding. He also knew Linda liked to see their extended warranties sold.  These were usually pure profit.