Filed under Ibibio Sound Machine is an mp3 collection that included: Ibibio Sound Machine, Uyai; Lorez Alexandria: The Ultimate Collection; Anita Ward: Ring My Bell; Laura Mvula: The Dreaming Room (Special Edition); King: We Are King. Work that spans generations & genres. On random it makes for great driving music – though one has to deal with varying sound levels.

Starting with Lorez Alexandria: The Ultimate Collection – over 50 tracks mostly from her late 50’s & 60’s recordings. She is similar to Carmen McRae. Her voice is appealing, the material is standards with a torch leaning. I love her work on songs like You Stepped Out of A Dream, Good Morning Heartache. Underrated.

Anita Ward is disco but not a disco diva. Her one big hit Ring My Bell brings back good memories for me. The rest of the songs on this lp are okay, romantic fodder nicely produced but not as catchy. Download her hit. More modern is King – a fine harmony group with dance underpinnings & some gospel thrown in. Easy on the ears with songs about relationships, & some social commentary. Amazing harmonies, ethereal then earthy.

Which is also true of Laura Mvula’s The Dreaming Room (Special Edition). Part Kate Bush, Enya mixed with Beyonce sass: emotionally inviting, sweet and comforting – excellent production – though I find the vocal a little too buried in the mix – you have to listen harder 🙂 I found Mvula thanks to a Capturing Fire poet raving about this album.

Ibibio Sound Machine combines1980s afrobeat and 90s drum-and-bass into a fresh 2018 world music sound. I have their 1st self title release and Uyai. The horns remind me of Osibisa & also Aster Aweke. The music bubbles with rubbery electronica, Singer Eno Williams is sweet and emotional when needed. I read a rave review in Entrainment Weekly & downloaded the lps & am happy I did.

The Polishing of the Magi

The Armature Theatre Guild has been forced to cancel this year’s presentation of “The Polishing of the Magi” – I understand this will come as a disappointment to many of you – especially those of you whose children had been fortunate enough to be chosen to play the parts of the shepherds, lambs, sacrifices, dervishes and of course, the ultra blessed couple themselves.

Rehearsals had been going better than ever, according to Hank Grebly. It was the first time someone other than a member of the McGinch clan had been given the opportunity to direct the production and Hank was making the most of this opportunity.

But alas, as things often do, it all went to the apple press in a hand cart when it was clear that the McGinch’s weren’t willing to allow things to progress smoothly. Not that this comes as much of a surprise either, mind you. We all pay for our indulgence of this family and its anti-social actions.

But not to give up all hope, as it seems Hank and some of the cast will be presenting a childless, clown version of the same story. It may not have the same impact, but the show must go on. We will be spared the often bitter competition over whose baby gets to play the pivotal role of the fulcrum of all religions. That alone almost makes up for not having a full scale production, doesn’t it?

On a lighter note the Visitor’s Mall will be hosting their annual Midnight Madness sale, for those us who have time and need for yet more shopping. As the Mall says ‘Shopping is in the true spirit of the season, and if we don’t spend, we just aren’t pious.’

I pray their prayers are answered.

Please note that the Left-Handicraft Fair slated for the Pumpkin County Area has been cancelled. It was to be a fund raiser for the production of the “Polishing of the Magi” & seeing as that has been cancelled, there seemed little reason to have the craft fair.

Those who had planned to pick up some of Sylvia’s Jams and Moose Tarts can find a display of them at Bea Petratica’s Bridalle Shoppe and at Meg’s Cafe. Get there early as these delicious treats don’t last long.

Sylvia has introduced two new jams this year that I, for one, can’t wait to try. The Orange & Maple Ashes with Nutmage and Quince with Ginger & Bark. I have no idea what bark she has used,  but I’m sure it will be a savoury delight to perk up those you who are disappointed by the cancellation of the “Polishing of the Magi. 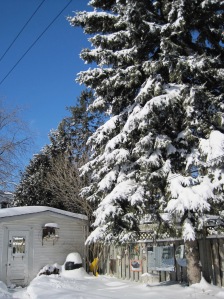 I miss going to Sam the Record Man to search through the various levels finding finds. There was an excellent World Music section on the second floor which is where I discovered Aster Aweke, an Ethiopian singer living in the USA. I was willing to take a chance on a $1.99 cassette of her first lp.

She’s been fairly compared to Aretha Franklin with her resonant soulful voice. Now I don’t speak or understand many other language beyond clumsy French and corazón roto Spanish, so I can’t tell you what she sings about but I like it. I’m open to letting the music function without the importance of the lyric – with English I can’t avoid sometimes feeling forced into an emotional response.

I have three of her recordings. Aster ( that cassette replaced & on a mp3 collection of Janis Ian), Kudu (a stand alone, as it were) and Sugar (a live recording on an mp3 collection of Buffy St. Marie). More about Janis and Buffy when I get to them on the shelf.

What grabbed me about her, besides the voice, was the horn section – it reminded me of Osibisa (an African band – more about them when I get to the ‘O’s.) In fact she does a few classic African folk songs that Osibisa also recorded. Woyaya for one. She’s available on iTunes.

“How many times do I have to tell you to turn that racket down?” Val’s mother shouted up the stairs.

“Sorry Mother.” Val cringed as she heard her mother come up to her room.

“Are you ready?” her mother asked.

“Oh those shoes are sweet, but you know, I think with some little bows of them they’d be even sweeter. What do you think Val?”

“I’m sure you’re right.” Val slipped off her shoes and handed them to her mother.

Having a Martha Stewart android for a mother was every girl’s dream but if they knew what it was really like they would know it for the nightmare it really was. Val still shuddered at the memory of her mother covering her school binders with kindergarten drawings she had made. Just the thing every high school girl loves to be reminded of. She cursed the day her father brought home the android.

“I’ll just get Karen to do that, shall I? Karen!” Martha shouted down the stairs.

Karen was this week’s assistant. Val was glad she was no longer the one who had to carry out her robot mother’s minute directions. She had hoped it would mean she and her mother could just do mother daughter things that weren’t for some TV program or book but that hadn’t happened yet.

“Yes Madam Stewart.” Karen appeared. She had sequin stars stuck to her chin, a streak of red paint in her hair and gobs of white plaster all over her sweater.

“How are you coming with those baby jumper flower pots?”

“They’ll be ready for Val’s show and tell.”

“Good. Now get a hot glue gun and stick some of those old Christmas bows on these shoes. If they look okay don’t forget to tell me so we can put them in the school’s Christmas show.”

“It is Val. We got rid of that old carpet but I thought it would make a darling coat.”

“I hope you vacuumed it first.”

“Yes Madam Stewart, I steam cleaned it along with four dozen potatoes for the Thanksgiving salad.”

“Good. I do think we’ll have time to refinish the frames on your glasses now Val. Would you like a faux marble finish or perhaps something fun in polka dots.”

“Oh, don’t be so silly. I know you are just joking anyway. Now I hope you like these bracelets. I made them out of old milk bottles.”

“Yes, mother they are simply lovely. Now can I get my shoes on and get out of here.”

“What time is your young gentle man picking you up?”

Just then the door bell rang.

“Right now.” Val rushed down glad for the opportunity to escape from the house.

“Val here’s a forget-me-not ring I made from some old braces and teeth. It’s the prefect friendship ring. Don’t you think Brad will love it?”